The Buena Vista Sanitation District is a public body organized and created by taxpaying electors of the District on March 17, 1953. The purpose of the District is to provide a complete sanitary sewer system for the District and the inhabitants thereof. In the organization petition to the Chaffee County District Court, the description of improvements to be constructed and installed was:

“Sewer mains and laterals, with necessary appurtenances and incidentals to provide a complete sanitary sewer system for said District, including a sewage disposal or treatment plant.”

The boundaries of the District were to be identical to those of the Town of Buena Vista. However, over the years, the boundaries have changed due to numerous inclusions into the District, which were not included in annexation to the Town.

The District sets a mill levy every year and the members of the District are taxed accordingly. The taxes collected constitute a small portion of the District’s total revenues, approximately 6.5 percent. The main income for the District comes from monthly sewer charges which are set at a flat rate, septage charges, CDOC charges and sewer tap fees. 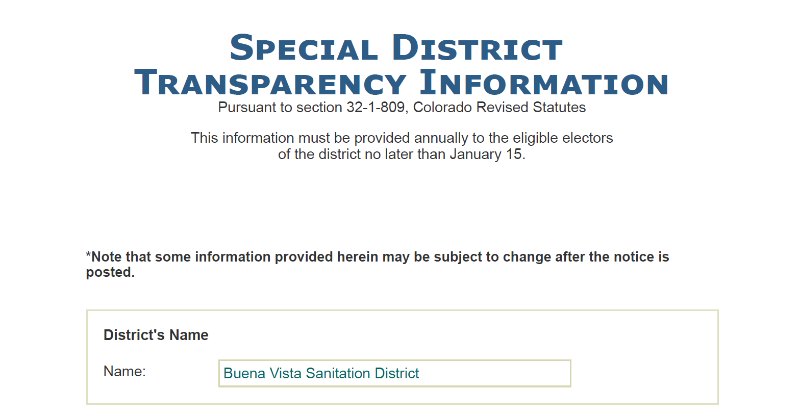 Pursuant to section 32-1-809, Colorado Revised Statutes for Transparency Notices may be filed with Special District Association of Colorado. This information must be provided annually to the eligible electors of the district no later than January 15 of each year.

The unqualified opinion of our independent external auditors, BiggsKofford, is included in the Buena Vista Sanitation District Financial Statements. It is their opinion that the the financial position of BVSD is in accordance with generally accepted accounting principles. The District’s financial position is strong. The current financial condition, staff capabilities, operating plans and upgrade plans to meet future wastewater quality requirements are well balanced and under control.

The Board of Directors of the Buena Vista Sanitation District will hold its regular meetings on the first and third Tuesday of every month at 6:00 pm at the plant, 26200 CR 301.

At said time and place, the Directors will consider such matters as may be properly presented. Meetings are open to the public; please contact us if you’d like to be on the agenda.

Meeting notices are posted pursuant to CRS 24-6-402(2)(c). Agendas for regular and special meetings are posted on this website, the District Office, 26200 CR 301 and the Chaffee County Clerk and Recorder Office 112 Linderman . Meeting minutes are available upon request.